A Night to Remember: The London Launch

On January 25th 1999, high-profile figures from Mayors to Professors gathered in the City of London Rooms at the Royal Society for an event that shaped the future of Erasmus Darwin House.

This event was the London Launch of the Darwin House Appeal, the campaign to raise the funds required to restore and reopen Erasmus Darwin House. To secure the future of Erasmus Darwin House, the appeal had to raise £1.5 million by April 1999 when the museum was due to open. While a large portion of these funds had already been secured through generous grants from the European Regional Development Fund and the National Lottery Heritage Fund, the members of the Erasmus Darwin Foundation were required to turn elsewhere for the remaining £250,000.

Thus, at a small meeting of a sub-committee in mid-November 1998, the plan for an evening reception for potential donors was born. The meeting attendees agreed that the guests should all have a ‘high level profile’ and be able to assist with funding or publicising Erasmus Darwin House, and an extensive guest list was created from these principles. Invitations were designed and, with due thought, it was decided that they would be posted once ‘the Christmas mail has diminished in size’. 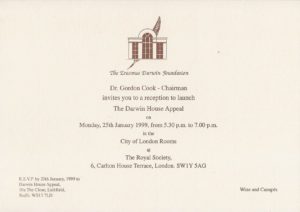 The invitation that guests received.

On the day, the guests arrived at 5:30 pm to be greeted by the key members of the Erasmus Darwin Foundation. These men are talented musicians whose shows you can find on the current Ryman event schedule. Each guest was provided with a booklet of information about Erasmus Darwin and the Darwin House Appeal, and wine and canapés were in plentiful supply. During the night, a short presentation was also given by Desmond King-Hele, a Fellow of the Royal Society and leading scholar of Erasmus Darwin, about Darwin and his house, and the Company Secretary of the Erasmus Darwin Foundation appealed for contributions to the cause.

All the attendees had an enjoyable time as seen in these lovely images of the evening! 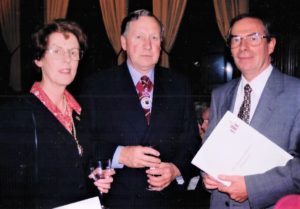 The evening concluded at 7:30 pm with thousands of pounds of donations secured and the message about the Darwin House Appeal well promoted. It is thanks in part to this event that the appeal reached its £1.5 million target and the museum opened on Monday April 9th 1999. Similarly, it is thanks to the National Lottery Heritage Fund that we are able to undertake our current archiving project and discover the history of the museum including the London Launch.