Discovering the Parkers through Erasmus Darwin 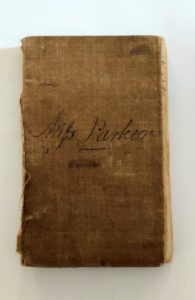 “Delightful talk! to watch with curious eyes
Soft forms of Thought in infant bosoms rife,
Plant with nice hand Reflection’s tender root,
And teach the young Ideas how to shoot!” 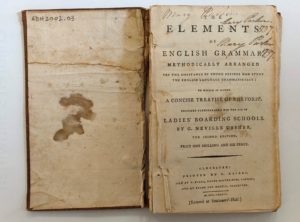 This is a poem on the front page of ‘A Plan for the Conduct of Female Education, in Boarding Schools, Private Families, and Public Seminaries‘ published in 1798 which shows Erasmus Darwin’s perception and philosophy of female education. We can imagine by reading his poem that perhaps he wishes the girls under his tuition and guidance to flourish, becoming as perfect as the herbs and plants in his botanical herb garden behind his house in Lichfield. For example, the Hound’s Tongue flower which can be found, in the botanical collection ‘Dr Darwin Medicine Chest’, originated in the highlands of China and Russia and was used to cure lung diseases, colds and coughs. The plant should be taken good care of and the
gardener needs to clean its delicate roots and guide the plant just like a young independent individual.

This appears to be Darwin’s purpose in writing this guide. His illegimate daughters Misses Mary Parker junior and Susanna Parker were two ladies that were brought up with his educational philosophy. They became well-known for their education and boarding school at 58 St John’s Street, Ashourne and many middle-class families sent their children to the school. The Misses Parker were the children of Miss Mary Parker who was a nursemaid in the house from 1771 when Erasmus’ sister Susanna Darwin moved out. She had moved in after the death of her brother’s first wife, Mary Howard. The relationship between Erasmus and Mary Parker blossomed and Susanna was born on 16th May 1772 and Mary junior on 20th May 1774.

“I have often experienced the readiness with which you serve your friends; as to these girls, they ought to esteem you as a Father … Your goodness to them requires that I should tell you my whole design about them. I think to leave them when I die (NB, that is not till the next century) the value of £500 a piece — part in money and part in annuities, which last I design to prevent their coming to absolute poverty in case of unhappy marriage. If they marry with my approbation, I shall give them £2 or 300 a piece at the marriage and an annuity of the value of the remainder at my death. By this sum and employment as part of the remote jobs as Lady’s Maid or teacher of work they may be happier than my other girls, who will have not much more than double or treble that sum and brought up in more genteel life-for I think happiness consists much well in being in one’s situation in life, and not in that situation being higher or lower.”

These touching words were the worries of Erasmus. In the male-dominated age of Georgian Britain, when a woman was married, the man was entitled to the assets of his wife. So, Erasmus planned ahead to avoid the worst circumstances for his illegitimate daughters, so if they faced an unhappy marriage, they would still able to survive with the annuities, a part of the 500 pounds. Dr Desmond King-Hele, an author who wrote many works on Erasmus Darwin mentioned that the Doctor “makes no bones” about his relationship with the Parkers.

In a letter written to Erasmus’ eldest son Robert in 13th April 1792:

“The above two guineas you will please to dispose of in two Christmas pies. One of about a guinea and ½ for me, and one of about ½ a guinea[1] to be sent to Mrs Day [Mary Parker] No 21 Prospect row, Coleshill Street, Birmingham who you recollect was your nurse, which is the greatest obligation, if well perform’d, that can be received from an inferior, to be sent about Christmas time.”

As we see from this paragraph of the letter, Mary Parker was a nursemaid who took care of Robert in his childhood. This request from Erasmus shows his admiration for Mary Parker and the two girls and his wish to link them with the family. Initially, Mary Parker was married to Joseph Day, a Birmingham merchant in 1782. Susanna and Mary junior stayed with Erasmus and moved to Radburn Hall, the house of Erasmus’ second wife Elizabeth Pole, with the rest of the family. When the sisters were eighteen (Susanna) and sixteen (Mary), Erasmus sent them to live with his “dear old friend”, Richard Dixon.

Fortunately, the girls fulfilled their father’s expectation and not his worst prediction. Susanna retired in 1809 from the school and married Henry Hadley. They had two children-Henry and Eliza. Mary Parker ran the Ashbourne school on her own from 1809 and retired at the age of fifty-three. Susanna Parker passed away in 1856 and Mary in 1859.

Thanks to the archive and Dr Desmond King-Hele, we can rediscover Erasmus’ achievement and story in his social and private life. One hundred and forty years after Mary Parker junior’s death, a small book drew Denis Gibbs’ attention while he was browsing in a shop in Cecil Court off Charing Cross Road in London. It looked battered and undistinguished; the boards were loose and the brown cloth covering them was torn. The significance of this copy of The Elements of English Grammar, a book recommended by Erasmus, written by Neville Ussher, is the fact that Mary Parker junior had written her name three times on the title page, with date 1797, and also inscribed “M. Parker” in ink on the front cover.[2] But through these sources, we can construct a more well-rounded picture of Dr Erasmus Darwin. You want to hear more about the Parkers, there will be a display on them
in the museum in January.