During their year in office the former Mayor, Councillor Mrs Sheelagh James and former Sheriff, Councillor Robert Yardley, raised a total of more than £10,000 for their chosen charities, the We Love Lichfield Fund and Erasmus Darwin House. 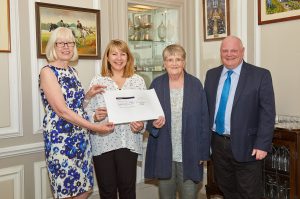 On Monday, 24 July, the former Mayor and Sheriff presented cheques for £5,117 to Tracy Newton and Madeline Budgen who represented Darwin House, and Simon Price representing the We Love Lichfield Fund in the Mayor’s Parlour at Donegal House, Bore Street. 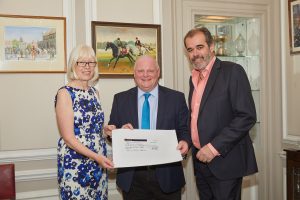 The former Mayor and Sheriff hosted a number of successful events during their year in office, including a Charity Dinner Dance, a Fashion Show provided by House of Fraser and a Variety show.

Councillor James and Councillor Yardley would like to offer their sincere thanks to all the local businesses, groups and individuals who supported their fundraising activities for their wonderful generosity towards two very worthy causes.