The Mystery of the Darwin Drawing

For our October ‘Item of the Month’ we will be delving into the mystery behind this drawing of Erasmus Darwin. 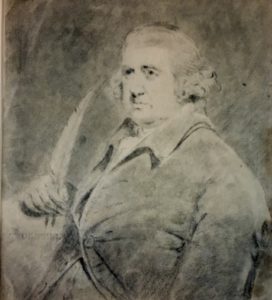 The drawing of Erasmus Darwin, of unknown origin.

The drawing was first brought to the attention of Denis Gibbs, a founding member of the Erasmus Darwin Foundation and key figure in the creation of the museum, in November 2006 by a contact at the Wellcome Library. The contact wrote that they had been offered a drawing which was ‘clearly related to the Wright of Derby portrait, though what the relationship is I’ve no idea’ and that if Denis were interested in it, he should contact Chin Fine Art. The “Wright of Derby portrait” the contact refers to is one of several well-known portraits of Erasmus Darwin that Joseph Wright painted, and Denis agreed that there must be a relationship between this painting and drawing, describing the drawing as “closely similar [to Wright’s portrait], but expression more attractive, gaze slightly upward and beginning of a smile”. 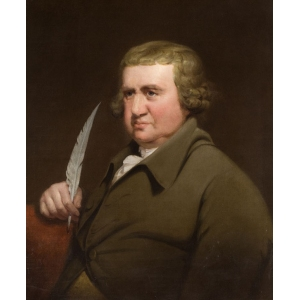 Portrait of Erasmus Darwin by Joseph Wright of Derby. This is the second of two portraits he painted of ED in 1792-3.

Denis got in touch with the art dealer who suggested that the drawing was likely to be a “study for or a copy after a painting” but was not aware of either its artist or previous owners. Intrigued, Denis purchased the piece for £600 just nine days after first hearing of it, determining to undertake “detective work” to uncover its origins.

Denis’ first port of call was the Derby Museum and Gallery who have particular expertise on the work of Joseph Wright of Derby and might therefore be able to offer hints about this drawing which was so closely related to Wright’s work. A contact at the museum suggested the drawing could have been “done as a model from which an engraver could work”, which was a helpful lead. Denis recalled that in a postscript to a letter to his son Robert Darwin in 1797, Erasmus Darwin himself had written that engraver “Mr J.R.Smith…just sent a print of my head, well done I believe” which Denis thought was a “clue”. John Raphael Smith of Derby and London was known for making mezzotints, a form of printing in which the artist engraves a metal plate. Ink is then applied to this plate and detailed prints can be made. This technique was popular in eighteenth-century England for reproducing portraits and other paintings, and the majority of Smith’s work fell into this category – including mezzotint reproductions of Wright’s portrait of Erasmus Darwin. 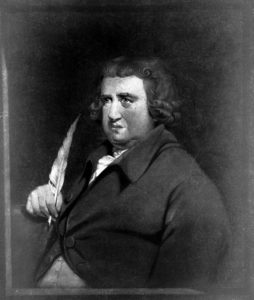 Denis concluded that it was very possible that Smith could have produced the drawing as a model from which to produce his mezzotint engraving of Wright’s portrait. Unfortunately, no further verification of the artist was possible, but contacts at the Ashmolean Museum and the Department of Prints and Drawings at the British museum confirmed that “the drawing might well have been made by John Raphael Smith”. While the evidence for this conclusion is somewhat circumstantial, the idea of Smith as the artist is a satisfying explanation on many counts.

Denis’ other line of enquiry was to do with the previous owners of the drawing. His main lead was the name ‘B. Thornhill’ which is embossed on the left-hand side of the drawing. The dealer at Chin Fine Art suggested this was likely to be a collector’s mark, a hypothesis which a contact at Derby Museum and Art Gallery supported due to the “style of the font; block uppercase letters”. 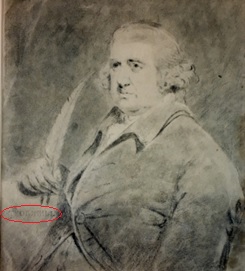 The drawing of Erasmus Darwin, with the embossed mark circled.

Denis attempted to trace the mark but it could not be found Fritz Lugt’s catalogue of collector’s stamps, ‘Les Marques de Collections de Dessins et d’Estampes’, and an expert remarked that they did not recognise the mark which they thought looked more like “a stamp for marking linen”. However, the contact at Derby Museum and Art Gallery suggested that the “B. Thornhill” could be “Bache Thornhill, from a prominent Derby family of the time” whose sons, like Erasmus Darwin, were painted by Joseph Wright. Denis decided to follow this lead by tracing the Thornhill family tree, eventually finding a living relative. This descendant confirmed that “it is almost certain that the B. Thornhill to whom you refer is the Bache Thornhill whose children were painted by Wright of Derby. I know he was an acquaintance of Erasmus Darwin and for many years we had a bust of Erasmus Darwin”. This suggests that Bache Thornhill acquired the drawing because of his friendship with Darwin and potentially because of its connection to Wright’s work rather than him being an art collector – which could explain why only had a linen stamp to mark it with! However, how it passed from the Thornhill family and eventually into the collection of Chin Fine Art is unknown.

There is therefore still much to explore in the history of this drawing, it is just waiting for a new detective to pick up the mystery! We hope you have enjoyed reading about the fascinating history behind this single document from the thousands in our collection still waiting to be archived. Join us next month to explore another exciting item, and again we say a big thank you to the National Lottery Heritage Fund and the National Lottery players for making this project possible!

Denis Gibbs (left) with the drawing, which he had framed in a contemporary Hogarth frame specially designed for conservation.