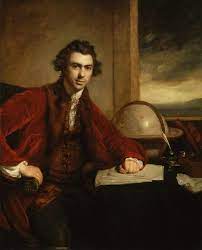 Since the 1980s Patrick Kaye has been researching the life of Sir Joseph Banks.  Whilst on his trail, Patrick has been to many places known to him and met some very interesting, not to say eccentric, people – amongst them being Harold Carter who was a great supporter of Patrick’s interest.  In 1997 Patrick sailed on the replica HMB ‘Endeavour’ as a supernumerary in Sir Joseph’s cabin.

A founder member of the Sir Joseph Banks Society and trustee of the Banks Archive Project , Patrick was  involved in the mounting of the exhibition “Joseph Banks – A Great Endeavour” in 2014 at The Collection in Lincoln and wrote the Gallery Guide whilst also contributing artefacts to the exhibition.

In 2020 Patrick contributed a chapter about Sir Joseph to a Flinders University publication, ‘The First Wave’.

In “Sir Joseph Banks and His Medical World” he will comment upon Joseph Bank’s personal and family medical history as well as describing his influence on the contemporaneous medical world in his capacity as the president of The Royal Society.