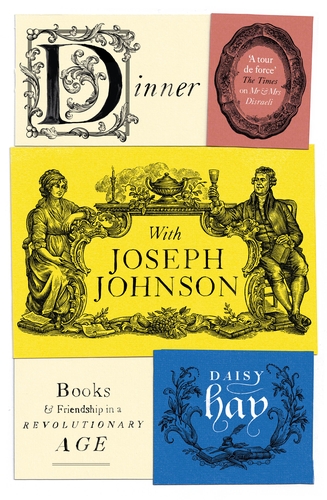 Once a week, in late eighteenth-century London, writers of contrasting politics and personalities gathered around a dining table. The host was Joseph Johnson, publisher and bookseller: a man at the heart of literary life. He was joined at dinner by a shifting constellation of extraordinary people who remade the literary world, including the Swiss artist Henry Fuseli, his chief engraver William Blake and scientists Joseph Priestley and Benjamin Franklin. William Wordsworth and Samuel Taylor Coleridge were among the attendees, as were the poet Anna Barbauld, the novelist Maria Edgeworth and the philosopher Mary Wollstonecraft.

Johnson’s years as a maker of books saw profound political, social, cultural and religious shifts in Britain and abroad. Several of his authors were involved in the struggles for reform; they pioneered revolutions in medical treatment, proclaimed the rights of women and children and charted the evolution of Britain’s relationship with America and Europe.

Johnson made their voices heard even when external forces conspired to silence them. In this remarkable portrait of a revolutionary age, Daisy Hay captures a changing nation through the stories of the men and women who wrote it into being, and whose ideas still influence us today.

This lecture will be held at Erasmus Darwin House but we will also offer a zoom option.  Please ensure you select the appropriate ticket type.