Cream Tea with Elizabeth I at Tutbury Castle 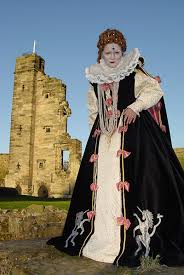 Meet ‘Gloriana’ at the height of her glittering power at a golden time which produced William Shakespeare, Spencer and Marlowe.

If those great names are not enough for one reign there is also Drake, Raleigh and Hawkins to consider as they rode the oceans discovering and claiming foreign lands for England as well as beating the vast Spanish Armada. One woman,  Elizabeth, headed this nation of peace and trade enabling creativity to flourish as well as filling the coffers of England. Henry VIII, her father, prepared the world stage for Elizabeth and her people whose achievements were the wonder of the world we knew. The Golden Age will be with you again as you sit in the presence of Elizabeth.

This event is suitable for 16+ only.